Many new studies on global impacts of cattle, and comparisons with other choices:


"Calculations show that environmental cost per calorie of dairy, poultry, pork and eggs are mutually comparable, but strikingly lower than the impacts of beef."


Report above indicates Beef production requires 28 times the land of the other averaged group, 11 times the irrigation water, and produces 5 times Greenhouse Gases.

Following charts from UBC Virtual Water Report, show water requirements and water use in the Okanagan and the high consumption for beef production. Some recent calculations by the Ministry of Agriculture for the Kettle basin indicate water demand estimates for beef production at more than 83% of total demand. 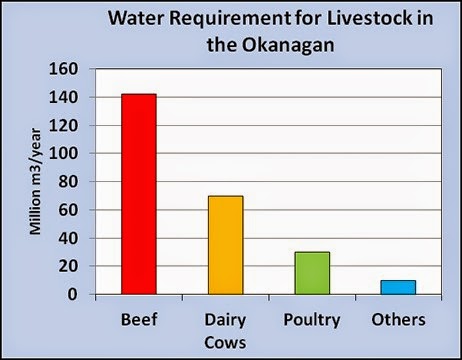 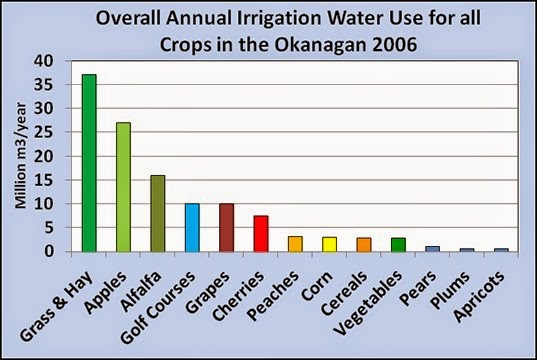 "Beef requires the largest amount of water, has one of the most inefficient energy conversion rates, produces by far the highest nutrients in manure."  UBC Report on Virtual Water. Hans Schreier & Darren Pang


See also Schreier Report: Better by the Drop
GLOBALY
•    Livestocks ( primarily cattle's)  contribution to environmental problems is on a massive scale. The impact is so significant that it needs to be addressed with urgency.


•    The environmental impact per unit of livestock production must be cut in half, just to avoid increasing the level of damage beyond its present level. About 73% of rangelands in dry areas, have been degraded to some extent, mostly through overgrazing, compaction and erosion created by livestock action


•    Livestock sector is responsible for 18% of greenhouse gas emissions measured in CO2 equivalent. This is a higher share than transport.


•    Livestock now account for about 20% of the total terrestrial animal biomass, and the 30% of the earth's land surface that they now pre-empt was once habitat for wildlife.


•    While regulating scale, inputs, wastes and so on can help, a crucial element is the correct pricing of natural resources such as land, water and use of waste sinks. Most frequently natural resources are free or underpriced. which leads to overexploitation and pollution.


•    A top priority is to achieve prices and fees that fully reflect the full economic and environmental costs, including all externalities.  This list from: Report by Food & Agriculture Organization of the U.N.   Livestocks Long Shadow.


Other resources on local impacts:


“historical grazing has resulted in significantly altered grassland status today (i.e.  it is far from its natural condition);


• recovery of grasslands towards a natural condition is slow, and in some cases  may not be possible without further intervention; and,


• recent grazing practices have further slowed the recovery to natural condition on some sites.”


"The public would not tolerate this level of damage if it were caused by a logging operation,” said board chair Bill Cafferata. "Clear and measurable standards are needed to protect sensitive riparian areas.”


A copy of this article is posted on the Boundary Alliance website:
www.boundaryalliance.org

In July 2014 the GCC made an award to Doug & Erika Fossen for "demonstrated excellence in grassland stewardship"   http://lifeonabccattleranch.files.wordpress.com/2014/07/grasslands.pdf


In August 2014 visiting biologists John and Mary Theberge  of Oliver BC who have studied grasslands throughout North America described the degraded weed infested grasslands portion of the Johnstone Creek Range Unit (AKA the Spring Pasture) as amongst the worst they had seen. I recommend their recent book, The  Ptarmigan’s Dilemma, in whole, and Chapter 10 in particular, for the chapter on grasslands.


The GCC which is supposedly dedicated to the protection and enhancement of native grasslands has badly damaged its credibility with the above award.


We note that the current chair of the GCC (as has been the case in recent years) is a rancher and also a past president of BC Cattlemen’s Association. Ms Jackson and another former GCC director were quoted last year as follows: "to feed one cow for a month costs $125.00, and the answer is a longer grazing season."


We presume their proposal is to extend grazing on already damaged grasslands while paying approx.. $2.00 per month for an AUM (animal unit month usually a cow & calf pair) while the other costs are externalized to public cost. To give some comparison, rancher provided figures for grazing on private land are between $15 to $30 per month (AUM). It would cost the rest of us us more than $ 2.00 per month to feed a pet rodent.


Compounding the absurdity of the award are complaints by Mr Fossen to the Western Producer of competition from exploding populations of deer and elk and suggestions  that declining forage has forced wildlife to move more into grasslands and riparian areas. Mr Fossen complains that lessees cannot turn cattle out until the grass is ready and that it is difficult for ranchers to assess when the grass is ready when wildlife are grazing it down.


Any non-rancher in this area (except some town dwellers and a few ranchers, but there's another story there that doesn't reflect well on cattle grazing) would know that wildlife populations have declined over the past 20 years and more, and blaming wildlife for delaying grass readiness for cattle, is an absurdity.  Many factors affect grass emergence in spring but the primarily natural ones are the variables of moisture and temperature. It is evident that private ungrazed lands adjacent to the Range Unit show significantly better growth and variety of desirable plant communities, than the range area. These contrasts are evident before  the annual arrival of range cows. Clearly soil compaction, overgrazing, poor grazing timing, poor oversight or some combination of these factors is making the significant difference between range and private land. While Mr Fossen and many other ranchers blame forest ingrowth and wildlife for degraded and poor pastures, they and the responsible ministry need to address the major cause, cattle grazing itself.


A so called Ecosystem Restoration project in the Johnstone Creek pasture began two years ago. The project has spent several hundred thousand dollars sourcing a variety of public funds, to primarily benefit range cattle grazing on public land where the annual rental fee has been around $160.00 or less. While Government claims that this project is primarily to benefit wildlife and obtained the majority of funding from the BC Habitat Conservation Fund, the reality is a project of primary benefit to cattle grazing which doesn't meet the mandate of HCF or the expectations of the hunter/fishers whose fees on licences, form the bulk of HCF funding.


It is more than unfortunate and a great cost to the public, that ranchers complaints about declining forage and wildlife effects, are accepted as guiding principles by MFLNRO while the primary causal effects of cow grazing on the degraded resource are largely ignored. It is more than time for change.

More detail and pics available in the extended version on the Boundary Alliance website:


April 2014 a group of public minded citizens replaced a section of fence around Lost Lake in the Gilpin Grasslands to better protect the area from off-road vehicle traffic and damage by range cows. The replacement fence was built as "wildlife friendly fencing".

The Original Fence: was built by Range Branch and Ministry of Forests, Lands & Natural Resources (MFLNRO) a few years ago to partly address cow damage and actions of off-road vehicles including mud-boggers. The installation was one of several made in the Gilpin which included fencing and waterers and were done at public expense. As is common, these installations were poorly planned, badly executed and non-wildlife friendly. As in the Gilpin and elsewhere these installations have usually failed to prevent the damage they were supposedly designed to prevent. Much of the non-friendly fencing was located along the edge of drop-offs substantially increasing the hazard to wildlife. See Montana State Wildlife Friendly Fencing brochure: here

Public complaints: despite several years of public concerns over the effectiveness of the installations, no changes or improvements were made.

A Waste of Public Funds: The writer does not know all of the motivations of the public-spirited group that re-fenced part of Lost lake at their personal expense and time, but on the basis of his own experience has surmised motivations would include a complete lack of confidence that  MFLNRO and Range Branch are properly representing the public interest on public lands. I could go on, and I will…..See expanded version: here

Waterer not activated::June 19th 2014 we saw that a waterer installed near Lost Lake had never been activated after cows arrived. New cow damage to the Lost Lake fence and riparian areas resulted. After MFLNRO were notified of the damage they offered some specious and ass-covering reasons why the waterer was not activated and blamed the cow damage on the new fence.  Their reasoning is simply not credible. Although MFLNRO advised that cows were supposedly moved out of the area before June 19th, the reality was that numbers of cows were still in the area and continued to do damage. Cows remained in the area until October or later.


We hear that MFLNRO is now "investigating" the new Lost Lake fence, possibly with the intent of punishing those responsible.


We suggest that MFLNRO acknowledge that the new structure has partly fixed a problem of the Ministry’s own making and has done so at no taxpayer expense. The new fence portion has provided an example and future model for "wildlife friendly fencing" that could address an issue that the Ministry has so far avoided. While the Ministry might be acting to discourage any further "Random Acts of Public Good," we suggest the Ministry accept the new fence as a lesson and model and publicly congratulate those responsible.

The Future of Cattle Grazing on Public Land:


While the foregoing might suggest a call for MFLNRO to do a better job, this writer is of the opinion that cattle grazing on public lands should cease as it is environmentally and economically unjustifiable.


Future blog and web articles will cover these issues.
An extended version of this post including other pics