A portion of damaged Nature Trust property in the Gilpin Grasslands has been fenced by volunteers to protect a spring and riparian area. This will be the first time since the property was acquired by Nature Trust in 1973, that this piece will be protected from range cows and off-roaders.


The fence was proposed at meetings of the Committee for the Enhancement of the Gilpin. Work began late 2014 and was completed June 2015.


Approximately 6 acres of Nature Trust land is now protected by wildlife friendly fencing.  As per recommendations of Montana State Wildlife Friendly Fencing Brochure. See link to Montana State fencing guidelines  on dryrotjournal blog:  Lost Lake..... Nov 2014.
Barry Brandow and Al Grant of www.boundaryalliance.org   initiated, led and financed materials for the project and substantially completed the work with occasional help from other volunteers and some hours contributed by Nature Trust’s Nick Burdock and helpers. The fence represents a contribution by volunteers of $9,300.00 to $10,700 value (based on contactor prices of $14,000 to $ 16,000 per km.) 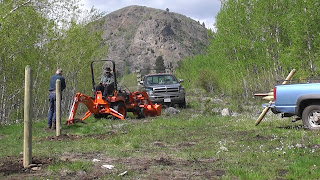 The original fence proposed would have expanded the area of a dis-functional fence installed by Range Branch several years ago. At the request of Nature Trust the area was expanded and ground conditions dictated a further expansion, so that the protected area is now 70% larger than originally proposed. It was originally intended that the fence be in place before arrival of range-cows in May. We were unable to complete the enlarged area on that schedule so some cow damage re-occurred in 2015 before completion of the exclosure.


We expect that exclusion of range cows and off-roaders will result in a significant improvement in the natural attributes of the area in future years.
The range-cattle are supposedly in the area from May 7 to June 15th each year but the reality is that range-cows have often frequented the area from May through Oct/Nov with significant damage to riparian zones and undue pressure on forage. See dryrotjournal blogs: Lost Lake .... Nov 2014 and Mike Pearson....June 2015 for biologist Mike Pearsons' report on this site and others in the Gilpin.


Prior to this initiative various public funds have been expended by Range Branch in the Gilpin grazing tenure, usually poorly planned, poorly constructed, non wildlife friendly and frequently dysfunctional. Examples abound outside the Gilpin area as well.


It is sad irony to this writer that he volunteered time , equipment and expense to this project when the rational solution to degraded grasslands, contaminated streams and absurd public costs, would be removal of the cow from public lands. See dryrotjournal blog articles:  Cattle Impacts Global & Local Nov 2014 and Cattle as an Invasive Species Dec 2014.
To illustrate the economic and ecological absurdity of cattle grazing on public lands using this small local example, this pasture on the Mehmel grazing tenure collects grazing rents of approx. $400 to $500 P.A. The extended version of this article which will be published at www.boundaryalliancer.org will have further comment on the inadequacies and unenforceable conditions in the Mehmel Range Use Plan.
The “cost” to protect a small portion of Nature Trust’s lot, amounted to “value” of $9,300 to $10,700. Various other public and private costs in the same pasture have likely exceeded this amount while the majority of the Nature Trust and public land portions remain mostly unprotected from range-cattle damage and off-roading.


While it is our hope that this initiative will:
·         Allow recovery of the Nature Trust spring and surrounding area


·         Demonstrate improved natural values in the absence of cattle grazing and off-roading.


·         Demonstrate the effectiveness of wildlife friendly fencing in the face of Range Branch’s reluctance to use same.


On the latter point we are less than optimistic. Range Branch has shown no ability or inclination to change their practices for the benefit af anything other than cattle grazing.

New comments are not allowed.